1. the principle of electrolytic descaling

1. Core electrolytic cell part: composed of noble metal oxide coated titanium anode rod and titanium cathode cylinder
2. Other accessories: controller, power cable and corresponding accessories, etc.
3. The device has a simple design and structure and is easy to operate. It can be directly placed in a cooling tower or a reservoir, and is easy to use.
4. The core electrolytic cell of this device is independently produced and developed by HS metal. When it is designed for reverse use, the descaling and descaling time is short, and the loss of the anode coating is relatively reduced, so the maintenance cost is reduced.
5. The electrolysis reaction occurs directly without adding other agents.
6. The circulating water descaling device can be designed according to the actual water quality and treatment capacity. 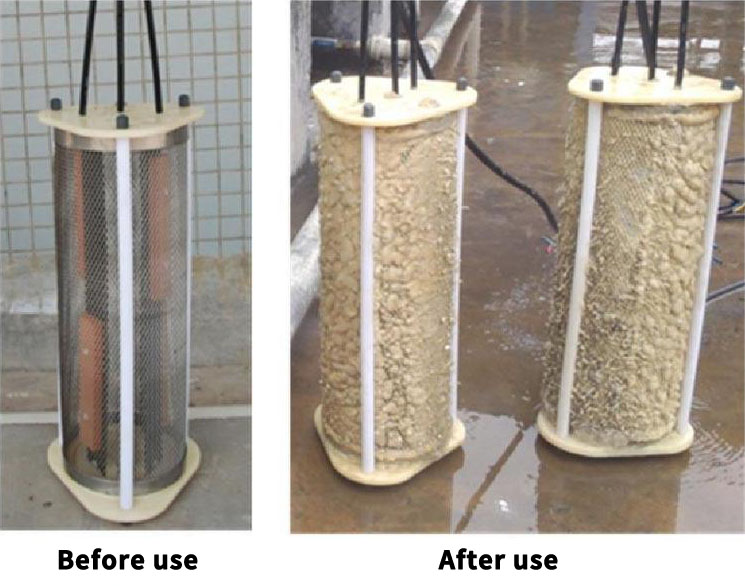 The electrochemical descaling device directly electrolyzes the cooling circulating water. During the electrolysis process, calcium and magnesium ions and some heavy metal ions in the water will adhere to the surface of the negative electrode (cathode) in the electrolytic cell of the electrolytic descaling system, thereby reducing the ion concentration. . In the reaction area near the anode, under the action of the electric field, the chloride ion loses electrons and is converted into free chlorine, accompanied by the generation of trace amounts of ozone and hydroxide radicals. These substances have a good algae killing effect, thereby inhibiting the growth of algae and fungi. At the same time, during the electrolysis reaction, a large amount of electrons are generated to supplement the electron potential difference, which has a certain effect of cathodic protection and anticorrosion on the inner wall of the metal.

Domestic electrolysis technology has been applied to treat large-scale circulating water. The principle is as follows:

The descaling effect is achieved through the electrochemical reaction in the DC electrolysis process. During electrolysis, the cathode undergoes a hydrogen evolution reaction to generate hydroxide ions, and a strong acid environment is generated in the cathode area. The calcium and magnesium ions in the water are precipitated and attached to the cathode surface, and then pass through the conductor, the cathode is converted into an anode, or mechanically scraped, so that the cathode surface is attached. Clothes fall off and are excluded. When the concentration of calcium and magnesium ions is lower than the equilibrium concentration of the precipitation solution, the calcium carbonate scale deposited on the surface of the pipes and heat exchangers will continue to dissolve, thereby achieving system descaling.

In the electrolysis reaction, the very important parts, the cathode and the anode, generally use titanium with good corrosion resistance as the base material, which is coated with MMO noble metal oxide, and the anode produces chlorine evolution, oxygen evolution reaction, active oxygen, active chlorine, free Substances such as base have strong oxidizing properties and have a certain effect on bacteria and algae in the water, thereby preventing the growth of bacteria and the adhesion of biological slime.

3. Aquaculture and aquatic seedlings are used for water purification;

Other types of descaling devices are displayed:

Any question or needs,please feel free to contact me: